“Built in 1907 for San Francisco Yacht Club Commodore J. R. Hanify, and named after his wife, Martha Fitzmaurice Hanify, Martha is a B.B. Crowninshield design built at W. F. Stone Boat Yard in San Francisco. Originally gaff rigged and now staysail rigged, she is 68’ on deck; 84’ sparred, 16’ beam, 8’ draft. Her planking is fir and silver bali on oak frames, and her interior is Honduran mahogany, graced with leaded glass cabinetry below decks.”

The Schooner Martha, the queen of Point Hudson, has been under the meticulous care of the Schooner Martha Foundation and her crew since 1996. In true Port Townsend fashion, the foundation has made a concerted effort to keep alive the history and heritage of this fine sailing vessel while introducing the next generations of sailors and shipwrights to the Salish Sea.

Since 1997, when the current restoration plan was put in place, Schooner Martha has seen her transom re-built, topside and bottom planking replaced, stem replaced, new deck installed, new stern post, frames replaced, and new forward mast. In the winter of 2020, after finding a sizable check in the mast hiding a substantial amount of rot, a new mast was moved to the top of the project list.  Following an incredibly fast repair of the current mast, Martha has been able to continue her on-water adventures while the Schooner Martha Foundation raised funds and acquired materials for the project.

Fast forward to December 2022, the construction of the new mast is well underway with a crew of talented shipwrights led by Captain Robert d’Arcy and Doug Jones. The project is set to take around four months to complete and will be constructed in the Boatshop at The Northwest Maritime Center.

The mast will be built of hollow box construction out of Sitka Spruce harvested from Vancouver Island. The spar will span 86 feet and replace the existing solid western red cedar mast. Utilizing more modern build techniques, the spar will be lighter and stronger than its predecessor. 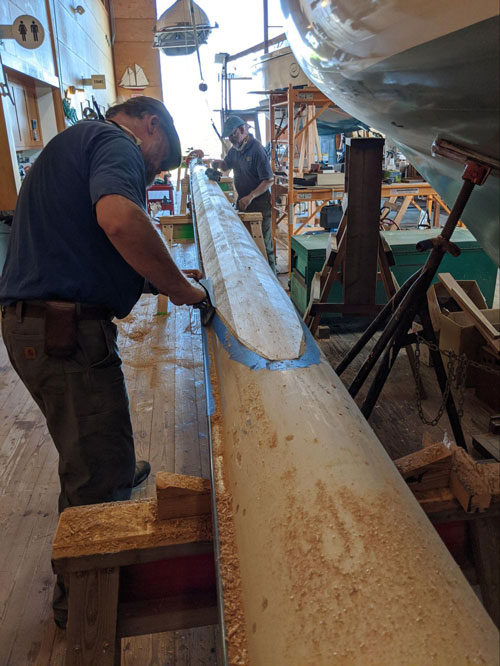 An Age Of Preservation

The old adage, “Out with the old and in with the new” doesn’t apply here. Yes, Martha is getting a new main mast but her old mast isn’t just getting chopped up and forgotten. The original main, built of a solid tree of western red cedar and stepped in 1907 with the launching of the boat, is a very well-traveled piece of lumber. The cedar from this mast has a wonderful story to tell and the Schooner Martha Foundation has teamed up with the Northwest Maritime Center to bring opportunities to grow the maritime culture by using the project as a teaching opportunity. The limber from the original spar is set to be milled in the spring and repurposed as part of a two-week boatbuilding course set to take place in June. The “Maiden of the Mast” as we have started calling the vessel will be a 16’ Sid Skiff, designed by Port Townsend local Ray Speck. She will be built of strip-planked construction and all parts of her build will be done through Boatshop programming. If all goes to plan the Maiden of The Mast will be set for launch at the Wooden Boat Festival in September.

With this project, we will also have the great opportunity to integrate our vocational training programs such as Real World Readiness and Port Townsend Maritime Academy into the project to plant the seed for the next generation of craftspeople. With a new group of young people comes a new set of skills and a new perspective of build style and technique. Spar construction, just like boat building, is under a constant state of change and evolution. New builders are learning new techniques to utilize more modern materials to improve upon the generations before them. Preservation of our deeply rooted marine trades culture is integral in keeping our floating pieces of history for generations to come. Just like the recycling of the main mast, we as an organization maintain a commitment to preserving the culture through creative opportunities for people both young and old.